Unfortunately, there are too many scammers lurking around, using cryptocurrency to their advantage. It is impossible to blame a project for being cautious when CoinJanitor attempts a buyout approach. Nevertheless, some of these projects’ attempts to protect themselves, are outright egregious. We recently came across a dev of a potentially deadcoin project that resorted to false accusations in an attempt to turn our buyout approach into one of the reasons for the project’s failure.

How Does CoinJanitor Operate?

We will refrain from mentioning the deadcoin in question. We would also like to ask anyone who reads this who knows which coin we are talking about, to keep the name of the coin secret. CoinJanitor is committed to operating honestly, without employing hard ball tactics or otherwise strong-arming projects into selling, which is why we will not mention the coin’s name.

Before we proceed to tell you exactly what happened and what CoinJanitor was falsely accused of, we must establish a few additional points about how we keep our operations honest and civil:

Our bounty program has been particularly useful in our effort to buyout deadcoins. The community knows this, so community members have taken the initiative to contact deadcoins they know of by themselves. One of our community members reached out to a coin that is in the process of dying according to our definition. The response he got from the developers of the project was quite blunt and dismissive, but we can understand why.

Many – about 50% – of the deadcoin developers we have contacted dismiss our project without even considering the possibility of a buyout. Some are sarcastic and others think we are one of those scams that plague the space. We wouldn’t be writing this piece if the dev of said deadcoin would have dismissed the bounty hunter even if his response was obtuse. You can see the developer’s initial response to the approach from our community members:

That response is quite common in our business. Many deadcoin developers hold on to the coins they created as if they were precious beyond belief. Their emotional attachment is understandable, but it does not give them the green light to malign CoinJanitor and spread lies about our own project. The deadcoin developer from the conversation above, proceeded to do just that, using his Discord channel to lie about CoinJanitor to his community. He went even a step further, attempting to use our approach to scapegoat us for his project’s recent exchange delisting:

The Truth About CoinJanitor

Given the asinine nature of the message this deadcoin dev posted on his Discord group, it is possible to see how much CoinJanitor can create upward pressure in the market. While it is obvious from this egregious reaction that our project hasn’t had enough exposure and is still misunderstood, we also understand that deadcoins or projects that are headed towards imminent failure, are likely to think that such a reaction is needed to save their project.

With that being said, this particular response exposes just how disingenuous a deadcoin dev can be when he or she tries to protect the project.

It might also be an instance of extreme ignorance about how the space works mixed with classic hubristic behavior. Here is why this deadcoin dev exposed his ignorance or his dishonesty with his response:

The deadcoin in question is a fork of an established, top cryptocurrency. This deadcoin failed to fulfill the purpose it was created for; it never gathered a critical mass of users either. Understanding this, it is easy to see that there are a few reasons why this deadcoin might have been delisted:

Clearly, if this deadcoin dev was having trouble keeping his project afloat, calling CoinJanitor a scam and issuing that warning, just helped him dig his own project’s grave. Nevertheless, we had to respond right there on that deadcoin’s discord channel, just below the warning, to make it clear to community members what CoinJanitor is really about.

Marc proceeded to respond, but his response was deleted. When he tried to respond again, he was banned from the deadcoin’s Discord channel, but not before he got a screenshot of that deadcoin’s dev response

Needless to say, the member of our community who tried to establish contact with this deadcoin, was also banned from the Discord channel. Hopefully, he will not be deterred, and he will keep on reaching out to the deadcoin projects he knows. Success is just around the corner, and our bounty hunters, as well as all the members of the deadcoins we buyout, will get paid.

CoinJanitor Will Always Uphold the Truth!

Fostering our community by integrating more users through buy outs is not easy. Finding more buyouts is even more difficult. CoinJanitor and its community, however, are determined to keep the effort up. More deadcoins will come and our success will fly in the face of the people who malign us or try to use us as an excuse for their own failure by spreading lies about us. Anyone who attempts a stunt like the one this particular deadcoin dev tried to pull, will be exposed immediately!

A BIG thank you to all of our community members who support our project and behave as good actors in the space even in the face of bad acting or FUD.

We would like to end this piece by issuing a warning: Although we are refraining from mentioning the name of the deadcoin in question, if its devs or community leaders decide to keep on spreading lies about our project, we will name the coin and we will use every tool at our disposal to spread the word about their malicious deeds.

Follow more CoinJanitor news and updates, and join the discussion with us on our Telegram or Twitter or just tell us which of your inactive tokens you want us to buy from you!

Help spread the word and share this story everywhere. Fight the FUD and Let’s Clean Crypto! 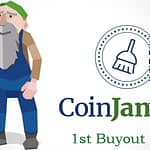